I am proud of what I have achieved. I have learned to live and thrive in a performance culture, but not be defined by it. If it was about winning, I would have stopped a long time ago. 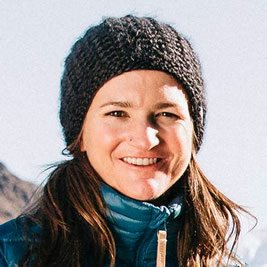 When I was 18, I found myself in a place where I had accomplished everything that was in my heart to do. I had money, I had fame, I had an Olympic gold medal, I had won every major snowboarding event I had ever dreamed of winning.

All of the experiences were incredible but it wasn’t fulfilling me. I started asking myself a jarring question over and over again: “Now what?”

I found myself driven for more, more medals, more exposure, more sponsors, and more people praising me for my performance.

When I was 20, I was contemplating quitting. I went to a snowboarding event and from the outside perspective, my life was picture-perfect and together. At the event, this girl had fallen both runs and was crying. I was half-paying attention to her conversation and her friend was trying to make her laugh and said, “Hey, it’s all right, God still loves you.”

There was just something about that comment that caught my attention that I couldn’t shake. I was blown away. Before then, I’d never really thought about God. But there was an undeniable stirring in me and I couldn’t ignore it. If there’s a God who loves me, I need to know Him.

So I ran back to my hotel room and I thought: “There has got to be a Bible in the hotel room…there are always Bibles in hotel rooms, right? As I started looking at the Bible, I realized that I don’t know where to look or where to start. There was something getting stirred up inside of me and I don’t know what to do.

I found out that that girl who made the comment was staying in my hotel. I knocked on her door and said, “Hey, my name’s Kelly and I think you might be a Christian and I think you need to tell me about God.”

And so I spent the next four months thinking, “Ok, God, if You’re real, reveal Yourself to me.” God really began to move in my heart. I got to the end of my season and I asked myself a few questions like, “Could I ever wake up another day and not think about God?”

And the answer was “no” because I was thinking about Him every day and He was real and in my life. And [another question I asked was]: “Could I ever run the other way and pretend He didn’t exist?” That answer was also “no.” And so I came to a conclusion and said, “Alright, Jesus, come and live life with me.”

In coming to know that I was significant apart from what I did, I began to develop that identity in God. I started to understand that I didn’t get my worth from people or from the things that I did. It was from Christ.

If I fail, what’s going to happen? Nothing. I’m not looking for my self-worth in the sport. If I hadn’t had that shift in my life, I think my world would have come crumbling down.

Through my relationship with God, I learned who I was, and was comfortable in who I was. But I’ll tell you, I’ve never had more fun snowboarding, and I’ve never been more free.